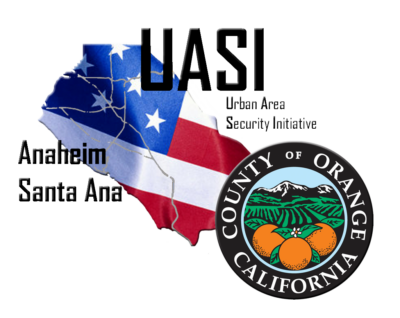 City of Orange Complex Coordinated Terrorist Attack Drill – This full-scale exercise involved more than 125 police, fire, and EMS personnel from the City of Orange and neighboring jurisdictions in a test of plans and training for responding to a complex coordinated terrorist attack (CCTA) directed against a college campus.  The exercise successfully addressed communications, coordination, incident command and rescue task force procedures.  Responders carried out multiple evolutions over the course of the eight-hour exercise.

Fullerton Complex Coordinated Terrorist Attack Drill – Almost 150 police, fire and EMS responders from Fullerton and neighboring cities, as well as County and State law enforcement personnel, participated in this exercise.  The scenario involved multiple shooters and unexploded IEDs in a semi-public facility.  Participants were tasked with locating and neutralizing the shooter and bomb threats while carrying out rescue task force procedures to minimize fatalities among the wounded at the scene.  The exercise provided players with multiple opportunities to demonstrate their training and to address their ability to coordinate a multiple-jurisdiction response.

Orange County Fire Authority Incident Management Team Exercise – This three-day exercise tested multiple aspects of the County’s procedures for deploying and operating one of its Type 3 Incident Management Teams.  Day One of the exercise involved Department-level management reacting to a region-wide power outage; this command post exercise provided senior command an opportunity to work through the power disruption problem, allocating resources to various mission requirements.  Day One culminated in the bombing of a major hospital prompting the decision to deploy the IMT.

Day Two involved the physical deployment and set-up of the IMT at a field location and the conduct of operations in response to a series of injects from the field.  More than 60 OCFA personnel took part in Day Two, staffing all IMT branches.  Day Two culminated in the assignment of development of an IAP to the Planning Branch.

Day Three consisted of a formal out brief of the IAP and the demobilization of the IMT site.